When Akron, Ohio’s economic stability was threatened, the staff at the Akron Beacon Journal made sure to thoroughly cover the events of the “The Goodyear War,” earning them the 1987 Pulitzer Prize for General News Reporting.
The award winning article, “The Goodyear War,” covered Sir James Michael Goldsmith’s attempts at taking over the Goodyear Tire & Rubber Co. in Akron.
Goodyear was the source of Akron’s economic life, as it was the largest employer for the city at the time. Many feared the takeover of Goodyear would result in an economic blow to the community.

Stuart Warner, the lead writer of “The Goodyear War,” recollected the events in a 25th anniversary piece.

“It was an emotional time for Akron and Northeast Ohio, facing the prospect of a foreigner taking over the Goodyear blimp and the rest of the nation’s 34th-largest company,” Warner wrote in an article for Inside Business in 2011.

The story came about when Doug Oplinger, the business editor of the Akron Beacon Journal, was reading stories about the stock market and noticed rumors of a Goodyear takeover.

“In Akron, just about everybody had a relationship with a tire company. We were the tire capital of the world. We had four major companies here, and Goodyear, by far, was the largest employer,” he said. “It was tens of thousands of people who had some direct connection to the company.”

The staff collected five to six paragraphs of information about the takeover rumors, and Oplinger had it put on the front page of the Beacon Journal the following afternoon.

News about the potential takeover was quiet for over a week, but Goodyear’s stock activity saw prices going up. Eventually, the rumors were confirmed and the staff at the Beacon Journal began their coverage.

When the Akron Beacon Journal’s truck would pull up to Goodyear’s building in Akron, people would flock from the building to buy newspapers.

The complete “Goodyear War” coverage included with the Pulitzer submission. 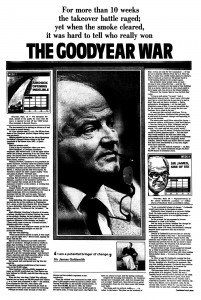 The special section reconstructed the attempt by investors, led by Sir James Goldsmith, to take over Akron’s biggest employer and loyal corporate citizen, Goodyear. It examined the potential effects on 13,000 local employees, schools, thousands of retirees, the United Way, churches and many other facets of community life. 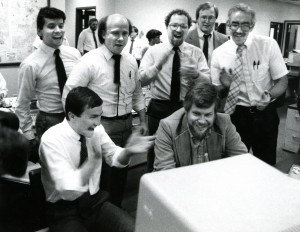