EDITOR FOUGHT CORRUPTION AND PAID WITH HIS LIFE

Don Mellett lived a life immersed in journalism, beginning during his childhood in Elmwood, Indiana, where his father was the founder and publisher of the Elmwood Gazette.

Mellett attended Indiana University, but left school due to over exertion. During his time at IU, he was the editor of the school’s newspaper, The Daily Student.

Even during his early years in journalism, Mellett was a crusader against corruption and pushed boundaries. While he was editor at The Daily Student he pressured Bloomington, Indiana, to improve the quality of water at the university.

It was Mellett’s unrelenting stance on corruption and search for the truth that eventually led to his murder. Mellett accepted the editor position at The Canton Daily News in 1925 and quickly made enemies over what he was publishing.

Mellett began to investigate organized crime in Canton and decided to publish his findings about the death of “whistleblower” Paul Kitzig. Mellett found pieces of evidence that pointed to Ben Rudner, a known bootlegger, as being responsible for Kitzig’s murder. Mellett decided to print what evidence he could find to send a message that he was on to something.

Rudner wanted revenge against Mellett, and Canton Police Detective Floyd Streitenberger, was also out for revenge over how Mellett often portrayed the Canton police force.

On July 16, 1926, Mellett was shot to death in his garage. The Canton police force was corrupt, which tainted their investigation of Mellett’s murder. Eventually, the Canton Daily News hired a private investigator who solved the murder and four people, including Rudner, Steintenberger and the Canton police chief, were sentenced to life in prison. Later, the police chief was acquitted.

These pieces included editorials of encouragement for Mellett’s fight, a tribute by a former governor, an extra edition stating how the paper would continue Mellett’s fight and a warning to the police chief to start fighting corruption, among others.

The Canton Daily News was awarded The Pulitzer Prize for Public Service and Mellett was honored for his efforts and sacrifice. 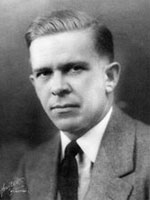 The cover letter for the Canton Daily News entry provides an overview of the paper’s anti-corruption crusade which ultimately led to Don Mellett’s death.

Eight sample stories from the Canton Daily News were submitted to the Pulitzer committee. Each story includes a cover letter describing its content.

A testimonial from former Ohio Governor James M. Cox was published by the paper after Mellett’s death. Cox owned several newspapers, including the Canton Daily News.

At the beginning of 1927, Editor & Publisher magazine featured an editorial saluting Mellett after the conviction of his murderer. The magazine also featured a story about Mellett’s replacement pursuing justice for Mellett and his family.

Don Mellett was inducted into the Indiana Journalism Hall of Fame in 1969 and is still honored on campus in a variety of ways.

The CantonRep.com published a story in September 2015, about Don Mellett’s granddaughters visiting his Pulitzer Prize at The William McKinley Museum for the first time.

The Weekly World News published a story on June 23, 1918, about the private investigator who found the men behind Mellett’s murder.

Shocking Stories of The Cleveland Mob, by Ted Schwarz, details stories of organized crime in Canton including the murder of Don Mellett.